Early Spring in the Garden 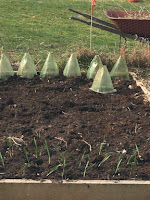 During those unseasonably warm and lovely almost summery days in early April, I got 3 of the 4 raised beds cleaned up.  I removed any remaining plants that I'd left from last summer, weeded them twice.  There was some volunteer garlic growing in one bed, so I dug up a couple of clumps and transplanted it into one of the beds.  I wasn't going to grow garlic this year, but free and unexpected plants!   The bulbs should still have time to develop.

I took some of the lettuces that had germinated in the winter sowing containers and transplanted them into the garden and covered them with plastic cloches.    I have some woad almost big enough to transplant and some Japanese Indigo which is ready to move into the garden, but it's still too early. 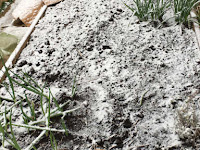 We've had snow and below freezing temperatures for the past couple of days.   The daffodils flowers are bent over from the snow and the cold.  They'll pop back up when the weather warms up, but they look so sad.   I had just started transplanting the winter onions from the main garden to this raised bed.  It snowed the next day, so they didn't even have a chance to settle in.   They're pretty hardy though.  I don't imagine they'll have a problem.   I've more to move over.  I want to till that part of the garden this year, and the over wintering onions will just get in the way.  Plus these ones are almost sweet and a lovely addition to a salad or stir fry.  I don't want to lose them. 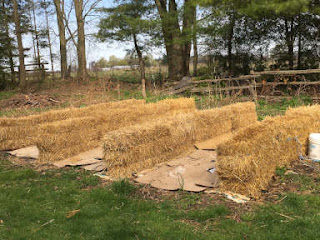 I read a couple of books on Straw Bale gardening and decided to experiment with it.  This part of the garden gets dug up by the chooks and because of the proximity of the surrounding pastures, is difficult to keep clear of weeds.

I laid down a lot of cardboard and put the straw bales on top of it.   The bales need to be conditioned so that the insides start to compost before planting them.  Both seeds and starter plants can be used.  Most of the bales won't need to start being conditioned until May 1st.  I conditioned two of them early so that I could plant onion sets, beets and chard, which are all safe to plant in cooler weather. Plus I wanted to start playing in the dirt, so an early start for some of the bales allowed me to do that.

While I could see subtle changes in the straw bales that were getting the water and nitrogen, I wondered if it was really working.  The instructions say that the centre of the bale will warm up.   It was just above freezing and the unconditioned bale inside was the same temperature as the ambient air temperature.  The inside of the conditioned bale was over 10 C degrees warmer.   Once our cold and snowy weather moves on, I'll put a bit of potting soil on the top of the bales to hold the seeds while they root, and plant the onion sets on the outside edges of the bales.  The beets and chard will go in the middle.  I've seen so many photos and read so many reviews of this method that show amazing gardens, that it was worth the bit of start up costs to purchase the bales and nutrients to get started.   The cardboard was free though and I've had great results using cardboard as a mulch.  By the end of the summer, it's starting to break down and it's composted completely by the spring.

Dye Plants-  I have a bunch of mature Madder which needs to be dug and used.   There will be a load of woad seeds later this summer and I have lots of woad seedlings to plant.    I have Japanese Indigo seedlings as well.  I'm thrilled that there is a surviving weld plant.    Last summer I stopped watering the raised beds because we had weeks of hot weather and no rain.   I didn't want to over burden our well with watering both the raised beds and the regular garden, so the raised beds were sacrificed  as they needed watering 2 or 3 times a day.   Having a weld plant which will go to seed this summer means I will have weld to play with next summer.   Plus a friend gave me some of her extra weld seed, and I've got some planted for seedlings.  The rest I'll scatter in the weld bed. My Dyer's Greenweed is totally planted in the wrong place, but it's at least surviving.   I don't really have another place to put it right now, so I'll leave it where it is.  At least the bunnies didn't eat it this year.  Last year they gnawed it practically to the ground and the poor plant had to regrow completely.