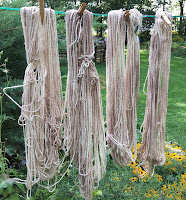 I wanted to knit a new winter toque.   The pattern called for a heavy worsted weight yarn.    I tried with a commercial yarn but it wasn't heavy enough, plus the colour didn't rock my world.   The pattern has a wide, cabled band.  I hunted through my stash and found some merino which I thought was an appropriate grist, which I'd spun worsted.  A worsted spun yarn would give really nice definition to the cables.   First, I dyed the white yarn to a mottled ecru colour.    It was nice and I liked it.   I started knitting and the cables looked wonderful.  By the time I was at the final 10 rows, I was questioning my choice.  The yarn was obviously just a tad bigger than needed, so even with my choosing a smaller size, the hat was too big.   Plus, this was a robust yarn.   My hat was really heavy!   So it's been frogged, with nary a photo for remembering it. 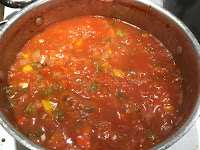 I made and canned salsa.  The recipe said it should thicken up with about 10 minutes of boiling.   It took over an hour.   Next time, I'll just run all the veggies through my food processor to rough chop as hand chopping took forever.  I have enough for half our winter needs though. 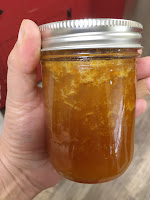 Apricot jam made from an 1832 recipe for Apricot Marmalade.   It's very delicious.   Apricots were crazy expensive at the market this year so it's also the most expensive jam I've ever made.   It's a good thing it's so tasty!  Just to mention that I've no problem using grocery store fruit, but I only found imported apricots this year and no little baskets or containers of local apricots.   I was happy to find them at the market. 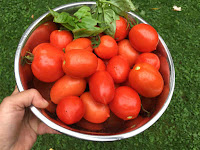 This bowl of garden fresh tomatoes and basil became a really good marinara sauce.  I didn't peel the tomatoes though.  I just chopped them up, added some onion, garlic, parsley, carrot, zucchini, and a bit of dried italian spice.  I tossed everything in the slow cooker and set it on low.  I stirred it twice, otherwise ignoring it.   About an hour before it was done, I shredded and added the basil leaves.   I liked it as is, although hubby added some chopped leftover hamburger patty to it.  It was good day one, but it was spectacular on day two.   There are several meals of pasta sauce in the freezer too! 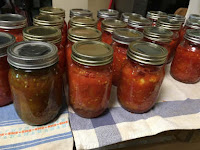 This is a bad photo of this year's bounty of canned tomatoes.   I ended up with 38 pints.   I actually ran out of clear jars and had to use a green glass jar, so one of the jars looks like it has ugly brownish tomatoes in it.  I'm aiming to using that one first.

Hubby has been chopping and splitting wood.  Not only did we get several loads of logs delivered, but a huge willow tree dropped a couple of branches on the neighbour's field, so he was out there cleaning up that as well.   The neighbour is in his 90's.  It really seems like there are not a lot of young independent farmers out there.