One of my kids asked me if I could make some wool dryer balls.   They're supposed to be environmentally friendly, shortening drying time by 30% - 50% and eliminating the need for fabric softener.   I don't use fabric softener anyway, but they didn't look very hard and it's not like I don't have the sorts of materials they might use on hand.   A quick interweb search showed tons of tutorials and yep, easy peasy to make as long as you have the right wool on hand.   Acrylic and superwash won't felt and for wool dryer balls, you definitely need felting to happen.

From searching for the workability and durability of wool dryer balls, I found out that you can use either yarn, roving or batt type preparations.  There were a few warnings out there that yarn balls don't felt completely and can start unrolling after a few months, requiring rewinding and felting.  I decided on a yarn core with a roving outer layer.  The yarn would make it easier to get a solid core while the roving should add durability. 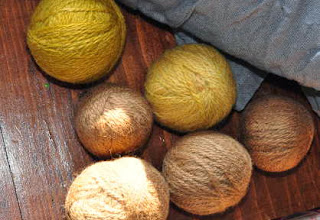 I dug through a box of scrap yarn and roving.  I found lots of bits from my first experiments with natural dyes which would make perfect cores.   I've all sorts of roving which is either in bits too small to make anything with, slightly compacted from sitting waiting for it's turn in the spinning queue or just stuff I don't really feel like working with right now. 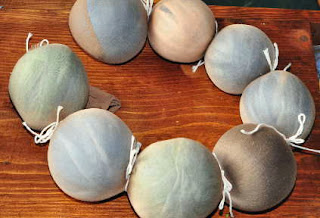 It really didn't take long to wind 8 core balls.  I tried to keep them fairly round, neat and remembered to tuck in the ends to keep them from unwinding before the first felting could take place.  I realized that I'd need a nylon stocking /pantyhose leg before I could continue.  I don't wear those things normally, so I actually had to run out and find some, which were on sale for $1 a pair.  The idea is to stuff them in the pantyhose leg and tie them off, in order to keep each one separate and facilitate felting while keeping the ball from both unwinding and keeping it round.    I just tossed this in with a regular laundry load, but you could use wet, soapy water and do each ball by hand as well. 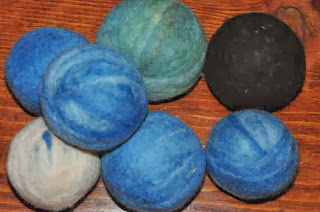 Don't use wool yarn to tie off between the dryer balls or it could felt and make it hard to remove.  I used white, cotton, butcher string.  Crochet cotton would work just fine as would knotting the pantyhose between each ball.  The latter might require cutting them out and I'm too cheap to use the pantyhose leg just once though.

I tossed the whole kit and kaboodle into the dryer after washing and the cores were adequately stuck together to start winding roving.  It took more than I'd expected but I also made fairly large balls.  The smallest is a bit larger than a tennis ball.  I'd wrapped them with enough roving to make them a good bit larger than my smallest desired circumference as I wasn't sure how much shrinkage I'd actually get in the felting process.   It shrank more than I'd hoped but not as much as I'd expected, so it was all good on that front.  I did a little bit of needle felting where the roving ended and any place where there were rough or loose spots.  It only took a few pokes here and there to needle felt the outer roving securely down.  I don't know if it really was necessary but I'd rather spend the two extra minutes to make sure than have them unravel during the washing process, or while one of my kids is doing laundry.  I stuffed them back in the stocking, tied them off and tossed them in with another load of laundry.

Now I have another batch of cores ready to go but am now waiting on more laundry to need washing!  Since the first batch worked out so well, I figure that it will be a useful pressie for several of my kids.