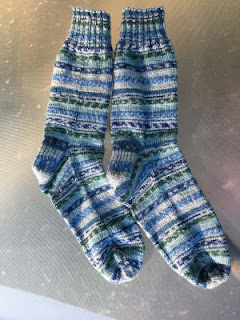 I think I did it!  When putting these two socks, exactly side by side, it looks like the stripes match up exactly.   I think I even got it matched to the number of final rows in the toe decrease.  I couldn't find a way to photograph  them with the stripes perfect though.  Maybe if I had sock blockers.   However I don't really want to spend the money to purchase sock blockers, so I may just soak these and then pin them to shape on a rubber mat, like one would do with other pieces of knitting.  Not quite as simple and effective as a sock blocker, but I don't have to buy anything either.

The sock yarn was nice to knit with.  It wasn't splitty and didn't tangle.   Once I figured out where the repeat was, it was easy to find my starting point and I had a minimal amount of waste, which was also nice.  I managed to toss the ball band out by accident though, so I have no idea what the sock yarn that I used was called!  Despite the matching and constant checking to make sure my tension was the same, it was a fairly fun knit. 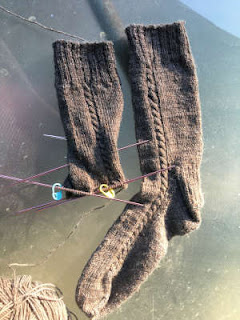 The solid socks which are a grey/brown colour haven't been quite
as much fun.    A lot of it has been my fault because I knit the first sock and then knit the blue striped pair before I did the second sock.   I also didn't think to write down the details as I was going, which did make it more difficult.   It's not a difficult pattern, but I started off the second sock with making the cables the wrong size and had to rip back half the top part, back to the ribbing.   Then I dropped a stitch in a cable and had to rip back to where I could pick it up because it was too difficult to try to hook it back over several cables.  Then I started turning the heel before I did the heel flap!  Argh, that was such a careless error because I had counted out the heel, meant to knit the heel flap, told myself to do it and then got distracted by something DH was watching on the telly.  Thankfully I found my mistake before I'd turned the whole heel.  To top it off, this yarn is splitty.   It doesn't seem to have much stretch or forgiveness to it, so it's not quite so much fun to knit with.   I wish now I'd gone for a more complicated pattern.  At least that would make the end result more worthwhile for all this fussing over a single sock that I've been doing. 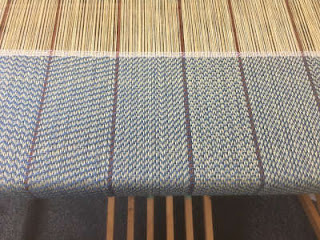 My hip has been cranky lately and weaving on my Fanny floor loom has been difficult.  However there is a little Artisat loom in the guild room.   It's smaller than the Fanny loom, and has a smaller width to the treadle setup, which means less lateral movement for my cranky hip.   I was able to weave pain free on that little baby.

This was a leftover warp from a tea towel class.   I just did a straight twill treadling and wove off this towel in about 2 hours, with little to no effort or pain.   I'd love to purchase a loom like this so that I could get back to weaving.   Not happening though because we need to replace our furnace!   That's been priced out so far to $7200 because we don't have a fuel tank, so are switching from oil to propane.  That's without a/c too!   It's not available right now due to back orders and increased demand.   We haven't had central heating for a decade or more, so it will be a change.   We'll still use the woodstoves, but it means we don't have to get up in the middle of the night to load the stoves and can be away from home for more than 3 hours if we so choose.  That will be an interesting change.