Stories of socks, benches and raccoons. 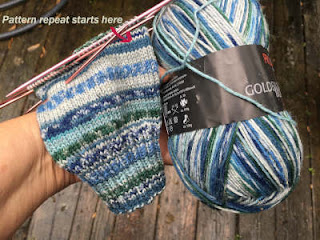 I wasn't going to make a new pair of socks until the autumn.  However, I was offered a trip  to the yarn store and came home with 3 new skeins of sock yarn.  This skein was a bit of a whimsy purchase.  I wanted something self striping.  The other two skeins were more abstract.  I'd not seen the pattern that this yarn made, but it was a nice yarn, so I wasn't sure what to expect.   I'm not a huge fan of this fake fair isle type stripes, however the yarn is so nice to knit with that I'm enjoying knitting them immensely.   I also decided to try to match the repeats, so I noted the start point and checked carefully for the repeat start so I could match the second sock to the first.  We'll see how that works out soon enough. 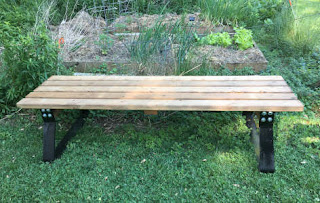 This bench left here when we moved into this house.   It had worn yellow painted legs, the screws were so rusty they were getting loose, and the wood on top was starting to rot.  It was really handy but the ugliest thing ever.   Last year it fell apart completely, but we couldn't get the wood to repair it.  This year, we found the right wood sizes.  DH painted the legs with black rust covering paint.  He even stained the ends and water sealed the whole thing.  It looks amazing now and should last for another 20 or so years. 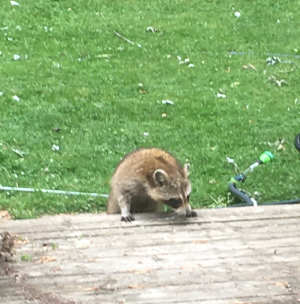 The other day we had a raccoon in the barn.  Well for several nights he'd been opening the door latch and getting in.  The chooks are pretty safe now, if they're inside since the entire pen is either solid wood or 1/2 in hardware cloth from ceiling to floor.   We put two jointed hinged latches on the door and locked them with snap carabiners.  No more anything without proper thumbs and the ability to slide the lock off the latch is getting into the barn now!  When I went to lock up the chooks the other night, one chook was inside and the rest refused to go into the barn.   The raccoon was in the pen, helping himself to the eggs.  It took two of us, but we couldn't get him out of the barn, and instead he just hid.  As soon as he did, the chooks raced inside for the night.   Not knowing where the predator was, we manually moved the girls into the greenhouse for the night, so they'd be safe.   The next day, we double checked the barn and secured the window better, just in case.   The chooks are staying in the pen for a bit.  They hate it, but with the raccoon out and about, I feel better about their safety.

Then today, while I was weeding the garden, I saw this critter coming toward me.  It was shortly after lunch time and he didn't seem at all afraid of me.  He's fairly young and luckily he waddled slowly enough that I could get into the house.  I watched him wander all over our deck before he headed off to where ever he was going.   I'm totally not impressed with a daylight loving raccoon hanging around our house.  Those poor chooks may spend most of the summer inside.  I really dislike raccoons.  I just wish they weren't cute.